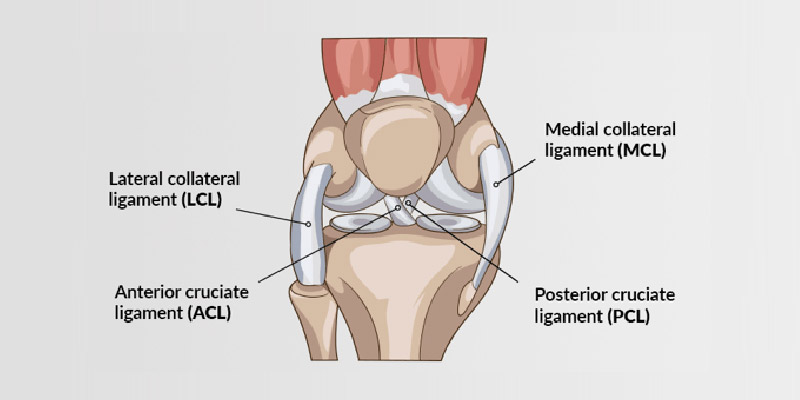 Knee Ligament: Knee ligaments are band of tissue that connects your thigh bone in upper leg to your lower leg bone.

There are four types of ligaments in your knee.

Any Injury in knee ligament is called a tear or a sprain. There are many causes for ligament injury.

Anterior cruciate ligament (ACL) Injury:The ACL is the most commonly injured knee ligament. ACL injuries commonly occur during sports that involve sudden changes in direction, jumping, and landing. Skiing, basketball, and football are sports that have a high risk of ACL injury.

Posterior cruciate ligament (PCL) injury:The PCL is less common than an ACL injury. It accounts for only 20% of all knee ligament injuries. PCL occur if a direct blow to the knee. PCL injuries generally happen during car accidents.

Medial collateral ligament (MCL) injury: MCL injury may occur due to pressure on the outside of the knee. MCL tears are very common during football matches.

Lateral collateral ligament (LCL): LCL injury may occur due to the pressure or the injury that push the knee joint from the inside, which results in stress on the outside part of the joint.

In a severe case in which your ligament is completely torn or stretched beyond its limits, your only option is reconstructive knee surgery. Your orthopaedic surgeon will decide based on the severity of your injury. Post surgery your physiotherapist also helps you to speed up your recovery.